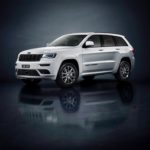 JEEP Australia has announced a pair of limited-edition variants for its flagship Grand Cherokee large SUV range in the form of the S-Limited and S-Overland, which will arrive in Australia in a release of 100 and 120 units respectively.
The first model, the S-Overland, is priced from $82,950 plus on-roads, and according to Jeep includes $9000 of extra value over its donor vehicle for a $4500 premium.
Available in local dealerships now, the S-Overland is identifiable by its unique styling tweaks including 20-inch granite crystal aluminium wheels, premium LED foglights, dual black chrome trapezoidal exhaust tips, and bespoke granite crystal fascia and appliques.
Inside, it scores SRT black Nappa leather seats with black axis perforated suede inserts, suede door bolsters and a 19-speaker Harman Kardon sound system.
The S-Overland uses the same engine as the Overland variant, namely a 3.0-litre turbo-diesel V6 producing 184kW/570Nm, driving all four wheels via an eight-speed automatic transmission.
Meanwhile, the S-Limited variant has more of a performance bent ahead and will arrive in showrooms in April with a number of sporty touches, totalling $15,000 of value, for an $8500 premium and an overall asking price of $71,450.
From the outside, the S-Limited gains an SRT Performance sports hood, granite crystal and black grille accented grille throats, and gloss black roof rails and mirror caps.
Two colour options are available on the S-Limited – Bright White and Diamond Black.
Inside, it scores ‘Heritage’ leather-trimmed seats paired with Liquid Titanium accents and a dual-pane panoramic sunroof.
Unlike the S-Overland, the S-Limited is powered by a 5.7-litre petrol Hemi V8 derived from the SRT grade, tuned to deliver 259kW/520Nm, while also driving all four wheels via an eight-speed automatic transmission.
Jeep Australia director of brand and product strategy Guillaume Drelon said the new variants would offer Grand Cherokee customers an added level of choice.
“We’re thrilled to offer two new limited-edition Jeep Grand Cherokees giving customers a choice of either a more premium, refined and fuel-efficient option with the S-Overland 3.0L V6 diesel or a high-performance model with the S-Limited Hemi V8 engine,” he said.
“Both provide a class leading 3500kg towing capacity,”
Last year, Jeep sold 3939 examples of the Grand Cherokee, down 26.5 per cent over the 5356 it managed over 2017 and trailing segment-leaders like the Toyota Prado (18,553) and Kluger (14,743).
Through the first three months of 2019, it has managed 681 sales, a further 31.8 per cent skid year-on-year.
2019 Jeep Grand Cherokee pricing*